This page is for everything about admiral.

The rank relate to your WPs admiral level and something else. But how rank works is unknown.

This event is unavailable because you can't do any purchasing to TC servers.

When you reach specific admiral levels, there are some supply from HQ for you:

Get some resources or items,even ships when login. Refresh at 12:00 am(GMT+8) every day. In the seventh day, you can open an extra reward box, there are some extra items and resources, sometimes you might get a rare ship from the box. This box is called The Seventh Day Box.

There are four kinds of rankings in the game: 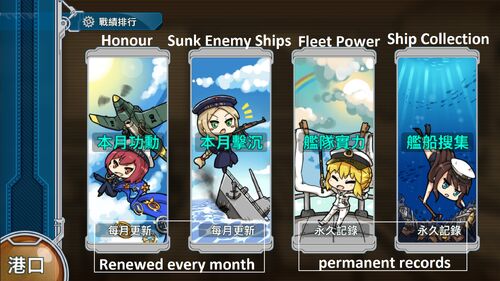 All rankings refresh at midnight and noon China time.

Honour and Sunk Enemy Ships are monthly rankings, they reset every month.

Sunk Enemy Ship ranking is how many enemy ships your ships had sunk in the past month. Each ships' score is counted individually. You can have multiple ships on the ranking at the same time.

This ranking is controversial because most of ships on it seem to be control by split instead of manual control.

Fleet Power directly correlates to the sum of your fleet's level. Exact calculation formula is unknown. Rumours said that aside from your fleets' level, things like equipment, enhancement progress, marriage, modification will all influence your fleet power.

Usually admirals turn the FPS to 60 because it looks more smoothly. But it is a good idea to turn FPS to 30 for saving some battery.

Gift code allows admirals to get resources, ships, equipments and items for Warship Girls. At the moment, you can receive a gift code in exhibition or find one in official announcements.

See Getting Started for more information.

Retrieved from "https://warship-girls.fandom.com/wiki/Admiral?oldid=12723"
Community content is available under CC-BY-SA unless otherwise noted.