Aoba is a heavy cruiser based on Japanese cruiser Aoba (Japanese: 青葉).

The Aoba-class is preceded by the Furutaka-class cruiser, because of the changing on design, so this two ships were listed as Aoba-class alone. In 1937, Aoba-class was proceed a large scale modification. During the war, Aoba- class and Furutaka -class were formed into the same troop. In the battle on Oct 1942, Aoba mistakenly treated U-navy as allies, and sent the signal" I am Aoba", then was shot by U-navy. Under the cover of allies, Aoba luckly escaped. However Furutaka was sunk, because of this. In 1944, Aoba was attacked by submarine, then got back to J-country, and never returned to the battle field. When J-country surrended , Aoba was self-sunk in the port. 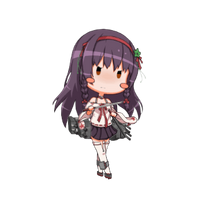 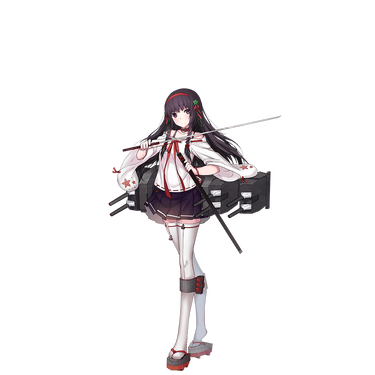 The new costume of Aoba was available in 2.2.1, and Aoba herself appeared in the startup screen as well.

(One more thing: her costume is the most expensive in present version.)

The introduction of this costume is: "Defeat Quincy!"

However, a pendant can be found on Aoba's bag:

Retrieved from "https://warship-girls.fandom.com/wiki/Aoba?oldid=21399"
Community content is available under CC-BY-SA unless otherwise noted.