Canberra is a Heavy Cruiser based on HMAS Canberra.

HMAS Canberra (I) (I33/D33), named after the Australian capital city of Canberra, was a Royal Australian Navy (RAN) heavy cruiser of the Kent sub-class of County class cruisers. Constructed in Scotland during the mid-1920s, the ship was commissioned in 1928, and spent the first part of her career primarily operating in Australian waters, with some deployments to the China Station.

At the start of World War II, Canberra was initially used for patrols and convoy escort around Australia. In July 1940, she was reassigned as a convoy escort between Western Australia, Sri Lanka, and South Africa. During this deployment, which ended in mid-1941, Canberra was involved in the hunt for several German auxiliary cruisers. The cruiser resumed operations in Australian waters, but when Japan entered the war, she was quickly reassigned to convoy duties around New Guinea, interspersed with operations in Malaysian and Javanese waters. Canberra later joined Task Force 44, and was involved in the Guadalcanal Campaign and the Tulagi landings.

On 9 August 1942, Canberra was struck by the opening Japanese shots of the Battle of Savo Island, and was quickly damaged. Unable to propel herself, the cruiser was evacuated and sunk in Ironbottom Sound by two American destroyers. The United States Navy Baltimore-class cruiser USS Canberra was named in honour of the Australian ship, and is the only American warship named for either a foreign warship (though USS Boxer was named for HMS Boxer) or a foreign capital city. 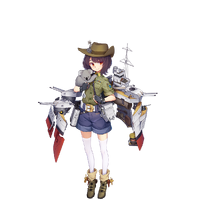 Retrieved from "https://warship-girls.fandom.com/wiki/Canberra?oldid=25027"
Community content is available under CC-BY-SA unless otherwise noted.