Enterprise is the warship that earned the most battle stars among the U-Country navy, and her name "Enterprise" was passed down as a legend among the US Navy. During the Battle of Midway of 1942, the three Yorktown-class carriers fought against the Japanese Navy, with Enterprise's dive bombers damaging Akagi, Kaga and Hiryu. During the Guadalcanal Campaign of 1942, although Enterprise was damaged by Japanese aircraft, rapid damage control allowed her to regain her battle ability. In the Battle of Santa Cruz Islands, Enterprise was damaged again but the damage control group came to the rescue, allowing her to continue moving even as she was being repaired. Moreover, her aircraft attacked Hiei, forcing Hiei to be scuttled in the end. After this battle, Enterprise became the only aircraft carrier of U-Country on the Pacific Ocean. On the flight deck, the crew raised a banner: "Enterprise vs Japan." 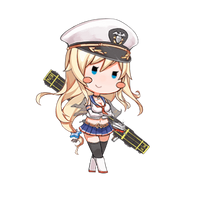 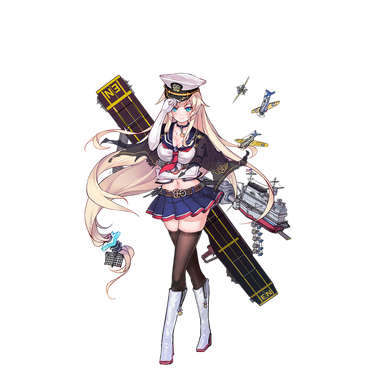 Similar to Yorktown, Enterprise's camouflage is also the one before WWII.

Douglas TBD Devastator was a kind of advanced torpedo bomber before war but became outdated during the war. In the Battle of Midway, TBD was completely destroyed, which declared the end of its time, and was soon replaced by Grumman TBF Avenger.

There is a radar on her hair together with a blue star, which is the CXAM-1 radar.

In her damaged illustration, not only is there the damage control group, but also crews can be seen. The equipment on her back, according to the illustrator's explanation, is her propulsion system GNT-MK2.

Rear Admiral Clarence Wade McClusky, Jr., (1 June 1902 – 27 June 1976) was a United States Navy aviator during World War II. He became Enterprise's air group commander in April 1942. During the Battle of Midway, while leading his air group's scout bombers on 4 June 1942, he made the critical tactical decision that found the trace of Arashi and led to the sinking of two of Japan's fleet carriers, Kaga and Akagi.

Lieutenant Commander Richard Halsey Best (March 24, 1910 – October 28, 2001) was a dive-bomber pilot in the United States Navy during World War II. In the Battle of Midway, at about 10:22h the Enterprise dive bombers started to attack two Japanese carriers. At this point, the attack became confusing, as all 34 Dauntless moved to attack Kaga, with none targeting Akagi. Lieutenant Best noticed the error and broke off with his two wingmen to attack Akagi. At 10:26h Best's three SBDs attacked Akagi. The first two bombs missed, however the last bomb dropped by Best punched though the flight deck and exploded in the upper hangar, right in the middle of 18 Nakajima B5N2 planes parked there. That hit doomed Akagi. After the battle, Best was awarded the Navy Cross and the Distinguished Flying Cross.

After the Battle of Santa Cruz, in which Hornet sank, Enterprise became the only carrier fighting against the IJN in the Pacific theater.

Leaving Hornet behind as she sailed for Noumea, the crew of Enterprise raised a banner on the flight deck: "Enterprise vs Japan."

One month later, still damaged and partially disabled, she went back in action for the Naval Battle of Guadalcanal. Alongside aircraft from Henderson Field, she sank Hiei, Kinugasa, and 7 of 11 army transports bound for Guadalcanal. Elements of her her screen, including Washington and South Dakota, went forward to sink Kirishima and Ayanami in a night action.

Enterprise shot down 911 aircraft, sank 71 ships and damaged 192 ships in total. She had won 20 medals of honor in total during WW2, and is the most awarded ship in American history.