The Second Ship to bear the name within the French Navy, She was built as a school cruiser (Similar to a light cruiser) and was the only one her class (She was never really designated a Class, being a one off Cruiser). She was laid down in the port of Saint Nazaire and was only built within two years. Before the years of world war II, She was used a prestige ship and toured around the Nations of South America where the french wanted to increase their influence in. She was tasked to Voyage around the world visitng many different ports and cities. Her lieutenant kept a very rich log, including pictures, of this voyage which can be found in the Naval Academy Museum in Romania.

Following the outbreak of World War II and the Fall of France, Jeanne d'Arc fled towards Halifax where she assimilated with the West Atlantic Division and took part in the German Naval Blockade near neutral ports. After 1940, she undertook important transfer missions for France across the Atlantic including the transfer of Gold Blocks for the Bank of France to Canada. She then went to the Mediteranian where she was disarmed and was to remain there untill the crew opted to rejoin the war in July 1943. She was then transfered to the Mediteranian after being refitted by the americans and did naval operations for the Free French forces.

Named after Joan of Arc 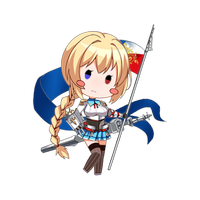 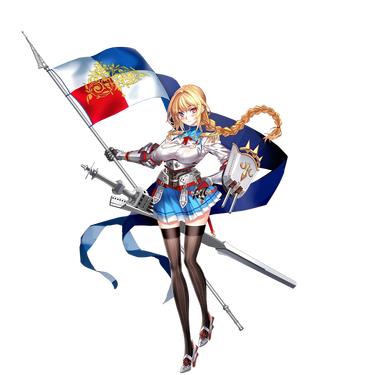 Retrieved from "https://warship-girls.fandom.com/wiki/Jeanne_d%27Arc?oldid=23446"
Community content is available under CC-BY-SA unless otherwise noted.