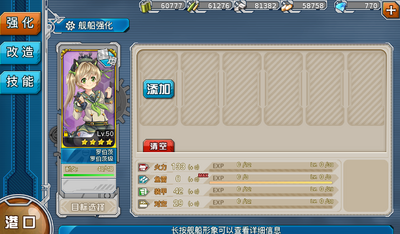 Enhancing is the act of improving a ship's Firepower, Torpedo, Armor and AA stats by expending other ships and is important in strengthening a ship and eventually unlocking skills. Each ship is worth a certain amount of enhancement experience which when used in enhancing fills the target ship's stat experience. Once a bar is filled the ship gains one point in that stat and remaining experience will keep rolling over to the next levels up until its maximum enhance-able value. 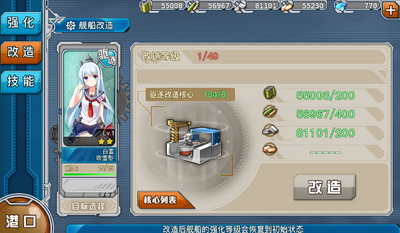 Modification is the act of upgrading a ship to a stronger version of itself through the expenditure of Cores and Resources once hitting a certain level. Each ship with an available modification will require a specific number and type of Cores associated with the kind of unit they are, Destroyer Cores, Cruiser Cores, Battleship Cores, Carrier Cores and Submarine Cores all of which can be earned from your daily campaigns and as a reward from one of three daily type hunt quests.

Once modified a ship can begin the process of earning and improving her skill. 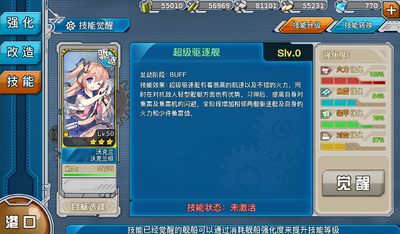 All modified ships and a few unmodified ships can unlock and improve skills which not only add a degree of historical flavor to units but also greatly improves not just the ship's abilities but the entire fleet with unique attacks, buffs and protection skills.

To obtain the skill, you must enhance the ship's Firepower, Torpedo, Armour and AA to their maximum level, then tap the "Awaken" button. You can see the enhancement progress at the right side. Awakening a skill will reset the ship's enhancement values to zero and increase her skill level by 1.

The process of enhancing and awakening can be done three times up to a maximum skill level of 3 where the skill will be at it's maximum effectiveness. 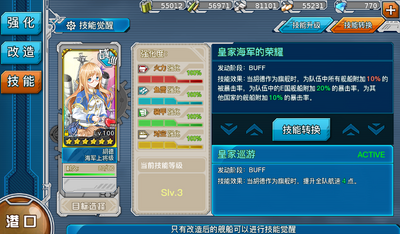 When modifying certain units you'll be prompted with a choice between a First (top) or Second (bottom) skill, this prompt is for all ships with a second skill. Second skills are a different skill that can be activated in place of a ship's First skill and will often have different requirements or effects. Second skills allow you to fine tune your fleet set up, dropping skills you might not meet the requirement for or find unnecessary.

Your choice in skills isn't permanent and can be changed at anytime through the second skill option in the Skill menu. Both skills share the same universal skill level but changing skills will reset the current enhanced stats to zero.

Skills can be divided into 5 categories:

Retrieved from "https://warship-girls.fandom.com/wiki/Modification?oldid=22150"
Community content is available under CC-BY-SA unless otherwise noted.