O'Bannon is a destroyer based on USS O'Bannon.

O'Bannon (DD-450) is a Fletcher-class destroyer. In 1943, O'Bannon accidentally met Japanese submarine Ro-34. Since the distance was too close, her guns were unable to attack. O'Bannon's deckhands, not having side arms, grabbed a bag of potatoes onboard and pelted the submarine with them. Mistook the potatoes as hand grenades, the submarine's sailors were too occupied to throw them away from the sub This gave O'Bannon the opportunity to longen the distance and finally sank the submarine with depth charge. O'Bannon even received a plaque commemorating this potato incident. O'Bannon received 17 battle stars for World War II service, placing her among the most decorated US ships of World War II, while none of her crew was awarded the Purple Heart (Purple Heart: a medal awarded to those wounded or killed while serving). 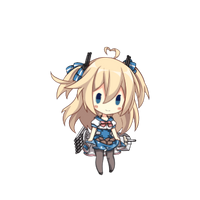 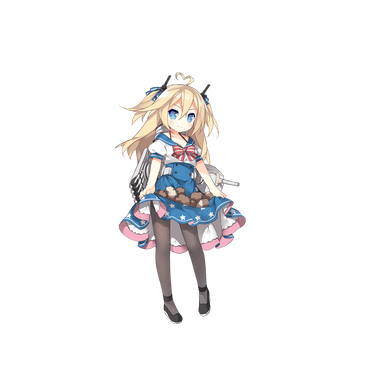 She has the same kind of clothes as William D. Porter, since both of them are drawn by Saru. The stars on skirt may be the star of US national flag.

There are advanced antisubmarine equipment (potatoes) on her skirt.

Someone noticed that O'Bannon's eyes look like Vittorio Veneto:

(Which one is fake?)

Later her luck was changed to 30, less than Sullivans, same as Washington.

On 10 December 2015 she became available in event maps and her luck was changed to 52, only 3 points less than Enterprise.

It's said that O'Bannon is much harder to get, compared with William D. Porter.

But there are also someone who has O'Bannon already but still in search of William D. Porter.

Retrieved from "https://warship-girls.fandom.com/wiki/O%27Bannon?oldid=18266"
Community content is available under CC-BY-SA unless otherwise noted.