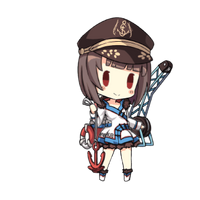 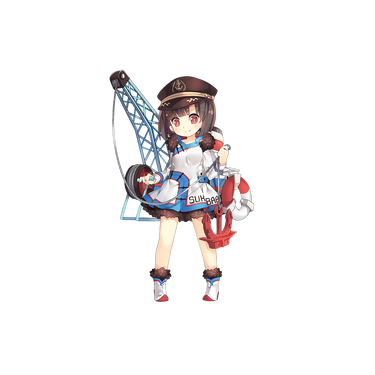 In version 1.4.0, her introduction is only one word "SECRET".

She is the BOSS of 1-5 with Rarity 5, belonging to a fleet called "Invincible Fleet" (a fleet with only one ship, LOL). Sunk by our fleet, you will receive an email containing this ship and magically she becomes Rarity 6.

Sükhbaatar is the first BOSS with HP bar in World I. However, one hit will make it clear.

Nevertheless she is still the BOSS of World I. Her BGM is the BOSS BGM.

Replenishment Oilers (or AP) can equip only Improvement Equipment.

After version 2.0.0.2, she became the main character of splash screen and acquired the "fishing" skill. This skill will make you easier acquire ships with high rarity (i.e. golden background and so on). Sükhbaatar will get 30 additional luck if you upgrade this skill to Level 3. Her maximum luck is 85 if you give her ring. (Luck EEEEEEX??)

The lyrics is from the song Dschinghis Khan (original version in German):[1][2]

Retrieved from "https://warship-girls.fandom.com/wiki/S%C3%BCkhbaatar?oldid=17248"
Community content is available under CC-BY-SA unless otherwise noted.