Thonburi and her sister ship, HTMS Sri Ayudhya, were designed following the incorporation of the earlier Rattanakosindra-class gunboats into the Siamese Navy in the 1920s. The Rattanakosindra class were British-built ships which featured six-inch guns in two turrets and light armor. Under Plaek Phibunsongkhram's command, the Siamese Navy began a series of modernization efforts. Priorities for the navy consisted of protecting the extensive Thai coastline, and coastal gunboats were viewed as the best resource. Several foreign firms from European countries offered a variety of designs, but in the end the Japanese company Kawasaki won the tender. after the war she was decommissioned and used as a training vessel until being stricken in 1959, part of her bridge and forward gun turret are preserved as a memorial at the Royal Thai Naval Academy

Named after Kingdom of Thonburi 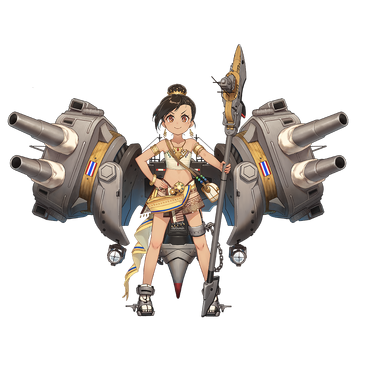 Retrieved from "https://warship-girls.fandom.com/wiki/Thonburi?oldid=25064"
Community content is available under CC-BY-SA unless otherwise noted.