Yorktown is an aircraft carrier based on USS Yorktown.

Yorktown is an aircraft carrier of U-Country in early WWII. Building on the experience of earlier classes, her design is more logical. Both Lexington and Yorktown participated in the Battle of Coral Sea, with Yorktown being damaged during this battle. Since the US Navy desperately needed aircraft carriers for the Battle of Midway, she was repaired in a short 72 hours. In the Battle of Midway, the three Yorktown-class aircraft carriers together wiped out the Japanese aircraft carrier forces. However, Yorktown was damaged by Hiryu's two waves of attack and sunk by I-168 in the end. It is worth mentioning that the famous Lieutenant John Thach was on Yorktown at that time. The Thach Weave tactic that he developed allowed US fighters to fight effectively against Japanese Zero fighters.

Named after Yorktown, Virginia, USA (or in memory of Siege of Yorktown). 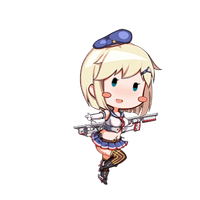 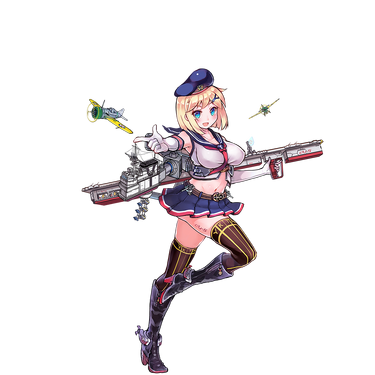 The apparel of Yorktown in her illustration is her camouflage before 1941. Furthermore, her aircraft sent out ingame is Lieutenant Thach's F2A-1 Buffalo. After WWII broke out, Thach was still on Saratoga and the aircraft had been changed to F4F already. In early 1942, Saratoga was damaged by torpedo, and Thach had to return back to land. During this time, he developed the "Thach Weave". He did not come to Yorktown until the Battle of Midway started.

In her damaged illustration, Yorktown is damaged by dive bombers and the damage control group is controlling fire. She is also covering her injured left eye, representing the history of her bridge being pierced by a Japanese bomb during the Battle of the Coral Sea. (not got shelled by a "Special Type destroyer").

Retrieved from "https://warship-girls.fandom.com/wiki/Yorktown?oldid=23436"
Community content is available under CC-BY-SA unless otherwise noted.